By Ryan Allway · Tuesday, July 5th, 2016
In an effort to reduce foodborne illness, the U.S. Department of Agriculture’s Food Safety and Inspection Service, FSIS, announced new federal standards to reduce Salmonella and Campylobacter in ground chicken and turkey products, as well as in raw chicken breasts, legs, and wings.
These tough new regulations will take effect July 1, 2016 and have the potential to impact the very large sales of poultry processing operations of Tyson Foods, Inc. (NYSE: TSN), Pilgrims Pride Corporation, (NASDAQ: PPC), Sanderson Farms, Inc., (NASDAQ: SAFM), Hormel Foods Corporation, (NYSE: HRL), Perdue, Cargill, Smithfield Food, Inc., Conagra Foods, Inc., and every other poultry processor.
New Food Pathogen Performance Standards
The USDA Food Safety and Inspection Service will begin sampling large-volume plants four to five times monthly. The new performance standards for salmonella and campylobacter are as follows:
Comminuted chicken
Comminuted turkey
Chicken parts
What Happens When Performance Standards Aren’t Met?
Failure to meet performance standards will result in the following agency action:
Certain foodborne pathogen findings in plants may lead to closer scrutiny or enforcement action by FSIS. The agency will be looking for repetitive findings of foodborne pathogens of public health concern, antibiotic-resistant strains and strains associated with human disease outbreaks.
If these pathogens are found, FSIS will take the following action:
Plants will have 90 days to effectively correct the food safety issues or enforcement action may follow.
Prominently Posted Performance Results Could Adversely Affect Poultry Sales of Low Performing Suppliers
Large commercial buyers such as Sysco Corp (NYSE: SYY), U.S. Foods (NYSE: USFD), United Natural Foods, Inc. (NASDAQ: UNFI), McDonald’s Corp. (NYSE: MCD), Whole Foods Market, Inc. (NASDAQ: WFM) and more are at risk of catastrophic loss of brand image and financial loss from potential foodborne illness are likely to closely monitor performance postings and take prudent steps to avoid higher-risk poultry.
Smaller companies equally at risk such as El Pollo Loco Holdings, Inc. (NASDAQ: LOCO), Carrols Restaurant Group, Inc. (NASDAQ: TAST), and Habit Restaurants, Inc. (NASDAQ: HABT) will also be paying close attention to performance publications.
Though 48 million people fall sick every year from eating food tainted with salmonella, campylobacter, E. coli, and other contaminants, “more deaths were attributed to poultry than to any other commodity,” according to an analysis of outbreaks from 1998 through 2008 by the national Centers for Disease Control and Prevention.
Consumer Reports Study Suggests USDA New Performance Standards May Be Difficult To Meet
Consumer Reports conducted a study of over 300 chicken breasts that were purchased at various stores across the U.S. and the results were not what anybody expected. Ninety-seven percent of the chicken breasts purchased tested positively for pathogens including salmonella, campylobacter, and E. Coli, and the results were made publicly available.
Reduced Use of Antibiotics In Poultry makes It Even More Difficult To Meet New Standards
In 1940, antibiotics were found to promote animal growth and increase yields thereby increasing profits for poultry farmers. They also provide a layer of protection against disease. Since 2004, when the NIH published their findings suggesting that widespread overuse of antibiotics in poultry may be related to the spread of acquired resistance (Antimicrobial Resistance) in bacteria and other pathogens, consumer’s appetite for antibiotic-free poultry has been increasing greatly. Major producers, grocery market chains, and fast food chains have been quick to respond to meet consumer’s increasing desire for antibiotic-free poultry.
With decreasing use of antibiotics to protect against disease, poultry producers must raise the bar and quality standards to maintain its high standards for quality. With the bar set so high, industry is in even greater need for new defenses to protect against pathogens such as salmonella, E.coli, campylobacter, bird flu and many others.
All Natural, Iodine-based Technology Promises To provide Poultry Farmers And Processors With New Lines of Defense
Kenneth Code, Chief Scientific Officer of BioLargo, Inc., (BLGO) explains, “The all-natural iodine cycle is part of the natural ocean water cycles and it is well understood. Iodine, an essential nutrient, is also the broadest spectrum, most potent antimicrobial known and it features no known acquired resistance capabilities. The ocean stores up iodine in the form of an iodate, and microscopic sea life and plants use it in their metabolism. They release gases like methyl iodide and ethyl iodide that rise from the ocean into the high atmosphere, ionosphere, where the iodides are oxidized by UV light generating iodine [I2]. These energized forms of iodine then come on shore in the rain, and fall onto the land and as they come into contact vegetation they react to form iodides and iodates. The land drains to the river, the river to the ocean, and so it goes in a cycle. The Iodine Cycle is simply an elegant cleansing system for our earth and it is a critical cycle to maintain microbial balance in nature while, at the same time, iodine supports life as an essential nutrient.” 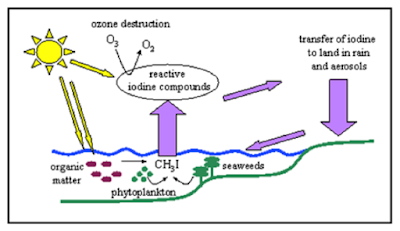 New Suite of Safe Solutions For Protecting Poultry From Salmonella, Campylobacter, Bird FluAnd Other Pathogens
Over the past ten years, BioLargo has developed a suite of patented technologies that deliver iodine’s powerful disinfection properties while at the same time making it safe for humans, animals and plants. BioLargo’s iodine-based products provide an arsenal of effective tools to build for industry build multiple lines of defense against bird flu, salmonella, E. coli and other pathogens by protecting drinking water, bedding, and air.
iSan And IoMax For Drinking Water
BioLargo’s licensee, Clarion Water announced, “IoMax™ is highly effective in killing pathogenic micro-organisms such as bacteria, viruses, fungi and potentially protozoa in water.” “IoMax™ is supplied through Clarion’s patented iSAN™ delivery system that doses aqueous iodine into water systems at an accuracy of up to +/- 0.5PPM.”
Clarion’s announcement continued, “In poultry drinking water applications specifically, field experience has shown a strong correlation between the use of IoMax™ and improvements in animal gut health, growth rates and mortality rates. As the marketplace continues to move toward a preference for all natural, antibiotic-free poultry products, control of pathogens increases in importance. Although Salmonella and Campylobacter spp. are the predominant pathogens associated with poultry, other pathogens also occur, including Clostridium perfringens, Escherichia coli 0157 and Listeria.”
“Effective and measurable control of pathogens in poultry operations is a priority for growers looking to protect their yields, especially in antibiotic-free lines,” said Tom Bercaw, President of Clarion Water. “Use of an iSAN™ system to deliver metered IoMax™ provides effective sanitation with full automation, data logging and remote monitoring capabilities. The active ingredient of IoMax™, free iodine, is well known for its efficacy as a broad-spectrum biocide across a wide variety of industries and applications. Additionally, IoMax™ provides supplementation to the animal diet with low levels of iodine residue. Beyond poultry, Clarion expects to be working with the EPA to approve expanded use of IoMax and iSan for drinking water for all livestock, and for produce wash post-harvest.”
CupriDyne® Clean For Air, Transportation Crates And Cleaning
Responding to an obvious need for better industrial odor control, BioLargo recently conducted successful trials for CupriDyne Clean to support some of the largest companies and cities in the United States. After exhibiting CupriDyne Clean at “WasteExpo 2016”, the world’s largest waste management convention, BioLargo posted a blog on their company web site describing industry excitement. “In addition to the traction already gained with the largest companies in the industry, the WasteExpo show generated more than 20 new customer trial opportunities with national, regional and municipal operators, and we started discussions with more than 10 potential sales/distribution partners. We are busy ramping up to support the expanding demand for CupriDyne Clean.”
CupriDyne Clean instantly breaks down ammonia and hydrogen sulfide to eliminate odors associated with poultry. CupriDyne Clean is commonly applied through misting that is more likely to contact volatile organic compounds by delivering it through the air.
Odor No More Bedding
BioLargo’s Odor-No-More™ Super-Absorbent Animal Bedding Additive™ with iodine is perfect for poultry farms where a clean environment is critical. It won the Editor’s Choice Award for bedding products after independent evaluation by the Horse Journal. This short video demonstrates the remarkable power of Odor No More. Product claims include extending bedding life and reducing bedding costs by up to 50%; odor elimination in minutes versus hours; cleans without adding excess moisture leading to safer and healthier bedding; and environmentally friendly and non-toxic.
BioLargo’s AOS Filter Is A New Food Safety Solution To Disinfect Poultry Wash Water In Chill Tanks with its First Commercial Prototype due in August of 2016
Researchers at the University of Alberta, affirmed the importance of BioLargo’s breakthrough–“The AOS Filter technology could be highly efficient in solving food safety problems and may be applied to improve food quality with the potential to improve storage life. The potential applications of the BioLargo AOS filter in the food industry could be endless – from primary commodities to finished food products.”
Extremely high levels of performance [disinfection] have been confirmed. 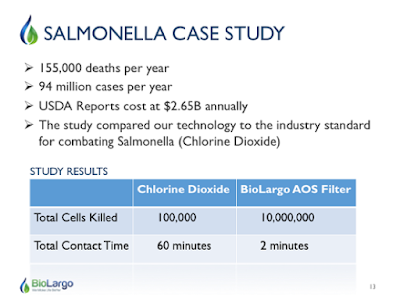 The AOS Filter uses molecular iodine and proven carbon filtration in conjunction with low-current electricity. Depending on the application, the iodine could be added to the water as a nutrient or, if preferred, it can be removed in the treatment process to eliminate the delivery of residual iodine. BioLargo announced a joint project with Northern Alberta Institute of Technology to design and build a fully operational prototype that is sensor driven and computer operated which will be showcased to industry at the University of Alberta in August this year.
BioLargo’s suite of disruptive iodine-based products work hand in hand to help create a clean, safe and healthy environment for a variety of food production operations like poultry, cattle, and hogs.
About BioLargo
BioLargo is a science and technology-company that has developed a portfolio of sustainable disruptive technologies to help keep people, animals, and our planet clean, safe, and healthy. The company is now commercializing its CupriDyne Clean Industrial Odor Control and EPA approved iSan System withIoMax through its license with Clarion Water. BioLargo is preparing to commercialize its breakthrough high-impact, low-cost AOS Filter for water treatment that will be showcased to industry at the University of Alberta currently scheduled for August 15, 2016. Additionally, the company is preparing to file its 510k FDA application for its novel wound care products in Q1 2017 with plans to be commercial in 2017.
After almost a decade of R&D and high investor expectations, BioLargo now appears to be well positioned to experience meaningful sales from all profit centers beginning in late 2016 and early 2017 and with very strong growth potential going forward.
For more information, visit the company’s website at www.biolargo.com.
Posted by BioLargo at 12:10