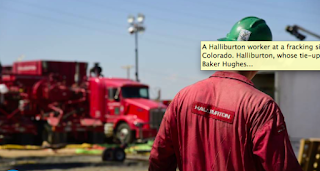 A Halliburton worker at a fracking site in Colorado. Halliburton, whose tie-up with Baker Hughes could be completed in December, had a loss in its latest quarter. PHOTO: JAMIE SCHWABEROW/BLOOMBERG NEWS
By

SELINA WILLIAMS
Updated Nov. 6, 2015 5:10 a.m. ET
Oil-field service companies are slashing costs amid an industry-rattling fall in crude prices, and no cut is too small—such as using white paint instead of yellow on underwater equipment.
“It’s not big money,” said Hallvard Hasselknippe, president of subsea at Technip SA, noting that adding pigment to make the industry standard yellow paint is more expensive. “There are many examples like this.”
The French energy engineering and construction company has been forced to take more drastic measures as well, saying in July it would cut 6,000 jobs. But scouring for even small cost savings marks a significant shift for the oil industry, which is renowned for its giant, customized projects that over the past decade became ever more complex and expensive.
Such moves come amid upheaval in the oil-field services industry, which finds itself competing for a shrinking number of oil projects with crude now trading at less than $50 a barrel, half its price from the summer of 2014. There have been tens of thousands of layoffs this year and huge mergers, such as the $35 billion tie-up of American behemoths Halliburton Co. and Baker Hughes Inc.
The service companies, which provide drilling rigs, conduct geological surveys and outfit exploration and production vessels, among other tasks, have taken it on the chin as BP PLC, Exxon MobilCorp. and Royal Dutch Shell PLC and other customers have slashed spending on new oil and gas projects.
Schlumberger Ltd., the world’s biggest oil-services company, last month reported a near halving of its third-quarter profit as revenue fell 33% from a year earlier. Halliburton, whose tie-up with Baker Hughes could be completed in December, swung to loss in the third quarter. Also, in the past week, engineering and project-management company Amec Foster Wheeler PLC issued a profit warning and pump and valve maker Weir Group PLC said it had cut 400 jobs in the third quarter. 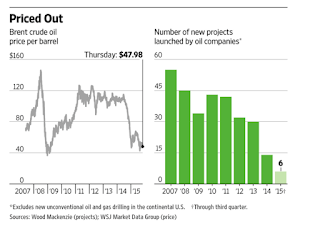 Next year could be even worse. With oil producers pulling back more than $200 billion in spending this year and next, Scotland-based energy consultancy Wood Mackenzie expects only 10 new projects globally to garner investment commitments. This would compound problems for the oil-field services sector, which has the capacity to support an average of 40 to 50 new energy projects a year.
“It’s a huge falloff,” said James Webb, an analyst at Wood Mackenzie. “The primary response from the service industry has been very much survival mode—cutting their own margins, bidding competitively and reducing capacity.”
The companies now are looking to standardize equipment, specifications and processes and to link with other industry players to save money. In some cases, they want to lower costs enough to convince oil companies to revive projects they had put on ice.
“It’s not because we’re nice. It’s one way for us to secure more volume, more business,” said Bernard Duroc-Danner, who heads Weatherford International, one of the world’s biggest drilling contractors.
At both the oil-services division of General Electric Co. and Norway’s Aker Solutions ASA, engineers are working to break the habit of customizing equipment for every subsea project by creating templates that work industrywide.
Schlumberger is counting on savings from its $12.7 billion acquisition of Cameron International Corp., which makes and installs the equipment that sits atop a well, such as valves, pumps and blowout preventers. The tie-up would allow them to offer equipment and services in one package, the companies say.
Schlumberger CEO Paal Kibsgaard said the bundling could be particularly effective in lowering costs for deepwater drilling, among the industry’s most-expensive undertakings. Goldman Sachs said in a recent report that 75% of deepwater projects aren’t currently profitable at an oil price of $60 a barrel.
“I think we can simplify, we can standardize, we can engineer costs out of the system,” Mr. Kibsgaard said on a conference call last month.
There are downsides to a one-size-fits-all strategy, some executives said.
“You will get cost efficiency from standardization, but you will almost certainly give up something on the production side,” said one senior oil-company executive, who asked not to be identified. 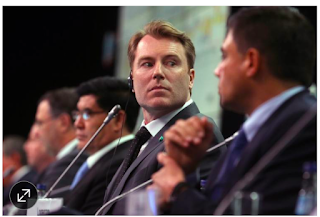 Paal Kibsgaard, CEO of Schlumberger. PHOTO: ADEICHEV SERGEI/TASS/ZUMA PRESS
The more cost-conscious approach is a far cry from the era of rising oil prices, when blockbuster developments were commissioned, like the Chevron Corp.-led Gorgon natural-gas export project in Australia. That $54 billion project is now more than 90% complete and parts of it are being commissioned, Chevron said on its website.
The tough times require the oil industry to think and work in a different way, says Bruno Chabas, the CEO of Netherlands-based SBM Offshore, that builds, installs and operates floating platforms for oil production.
Mr. Chabas said he and others have been pushing oil producers to change how they solicit work from service companies. He says some projects could be 30%-to-50% less expensive if service providers are allowed to do more of the engineering, rather than having to hew to 30,000-page tenders with everything already specified.
“It’s a battle, because it really requires a lot of change in the mind of our clients, but it’s really something which is necessary,” Mr. Chabas said in an earnings call in August.
Some oil-company executives contend they are best placed to know what is required and don’t over-engineer projects before putting them out for tender.
But with oil at $50 a barrel or less, projects aren’t moving forward. Big oil companies are instead scaling down and squeezing contractors on costs.
“We believe there will be even bigger savings in the long-term,” said Technip’s Mr. Hasselknippe.
Write to Selina Williams at selina.williams@wsj.com
Posted by BioLargo at 13:24