When oil prices were 80 to 100 dollars per barrel, water management costs were high, but they were tolerable when money was flowing profitably. However, as today’s falling price nears 40 dollars, water related costs are still high and only exacerbate widespread industry losses. The 150 US-based companies tracked by Oil & Gas Journal and Oil & Gas Financial Journal reported that revenues declined by 39% in the first quarter of 2015 compared with the first quarter of 2014 and by 27% compared with the previous quarter. Net income plummeted in the first quarter by more than 36 billion dollars for the entire group of companies compared with the same quarter in 2014. It dropped by 17.7 billion dollars in three months, from the 4Q14 to 1Q15.
Nobody can predict oil’s return to higher prices, but the price has fallen steeply since 2008 when it traded as high as $140 per barrel and the bottom is not yet clear. Global economic growth is anemic, and new technologies such as super fracking are helping to create an over supply of oil and gas that is reflected in today’s extraordinarily low prices. Today, water management has become a very big concern because it represents a significant percentage of total costs. The regulatory noose continues to tighten as well, only increasing the pressure to find a better water management solution, but that is a topic for another future article.

Water related costs in frack operations include the acquisition of source water that averages 4 million gallons per well, transportation of the source water to the well, transportation of the flowback and produced water from the well to the disposal site, and fees for disposal into an injection well. The Oil & Gas Journal reports, “There are requirements such as water supply, regulations, and transportation, principally trucking (which may account for 65% to 80% of total oilfield water management expenditures).” Even with the drought, the cost of the actual source water is not the big problem. Obvious big problems continue to be high transportation costs and disposal fees that alone average 1 dollar per barrel and can often run much higher.
Trucks are by far the predominant method of transporting the water and a typical truck carrying about 100 barrels (4,200 gallons) of either fresh water or wastewater normally ranges between $95 an hour to $150 an hour just for hauling.  Hauling time varies substantially depending on proximity of source water and disposal wells. That means about 1,000 truck visits are needed to service a single well to deliver the source water and a large number of truck loads to dispose of the flowback and produced water. Trucking costs alone for these operations are estimated to run close to 1.5 million dollars or 20% of the 7.5 million dollars that an average Marcellus well costs.
In addition to hauling, disposal costs average about $1.00 per barrel and can run substantially higher. In their advertisement for recycling technology, Halliburton claims that disposal costs can range from $3 to $12 per barrel. Arguably, water transportation and disposal costs may be the costliest elements of water management and also a very large percentage of total costs. On top of cost issues, strong public opposition to the heavy truck traffic associated with frack operations should be considered because it can sometimes stall or prohibit drilling permits from being issued.
The following chart prepared by researchers at the University of Texas illustrates that transportation heavy freshwater is by far the most commonly used source water for frac operations followed by the distant second choice of brackish groundwater. Recycling is the third and least used potential source of water, but if used on site, it could greatly reduce the big transportation costs and disposal fees. 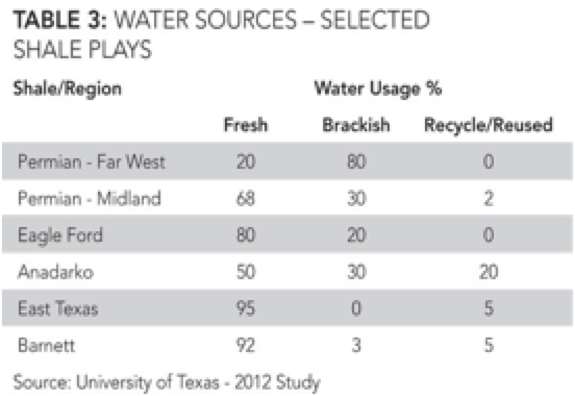 The burning question is, “With oil prices so low, and the need to slash water transportation and disposal costs, why is recycling being underutilized?”
The answer is that existing recycling methods are based on older and less efficient technologies that are simply too expensive and not cost-effective. For example, Halliburton, a leader in oilfield services, has been advertising and promoting its own brand of recycling technology called H2OForward™, but has been conspicuously absent for the past year during the steep decline of oil prices. The high energy cost of UV and electro-coagulation combined with low oil prices have very likely slowed adoption of Halliburton’s H2OForward™ recycling system probably causing the company to temporarily shelf it until higher prices return. West Virginia University published a report, “Zero Discharge Water Management”, discussing other recycling technologies and claimed that the cost to treat frac water with evaporation/crystallization runs close to a staggering $140 per 1,000 gallons as opposed to Reverse Osmosis that runs between $6 to $10 per 1,000 gallons.
In a research publication reviewed by the Department of Energy on June 30, 2015, the NETL (National Energy Technology Laboratory) of the DOE sums up the basic reasons why recycling is not being adopted today, “The U.S. Department Of Energy (DOE) is also interested in increasing the effectiveness of flowback water treatment processes because conventional water treatment technologies such as chemical treatment, filtration, reverse osmosis, distillation, etc., must be adapted to treat a range of flowback water chemistries and have disadvantages such (as) high cost, significant energy consumption, and low efficiency.”
When oil prices were higher, Walter Dale, a business manager for water solutions at Halliburton said, “Let’s not treat the water, let’s not take the salt out. We can make frack fluids out of it.” Vikram Rao who spent more than 30 years with Halliburton as senior vice president and chief technology officer partially agrees with Mr. Dale and is now a technical advisor to BioLargo. Dr. Rao points out, “Massive amounts of water used in new wells and in sweeping or flooding secondary recovery operations do not need to be freshwater. Reused water and underground brackish water are two obvious sources for replacement. In fact, brackish water and recycled water are even preferred over freshwater if its salinity is compatible.”
Rao elaborates, “For drilling operations, a little salinity will prevent swelling of clay, and since clay is a component of shale, preventing swelling is useful in the drilling and fracturing phases of operations. For water flooding, a little salinity is useful in unlocking oil from the formation. A technical explanation is that the salinity has to be monovalent, such as from Na (sodium). In one mechanism, oil is bound to the rock by a divalent species. The monovalent exchanges ions, thus releasing the oil from the rock.”
On Site Recycling To Slash Water Management Costs
Any technology that could greatly reduce transportation and disposal costs could not only save money, but it could help restore many operators to profitability. To be cost-effective, this technology would have to be installed on site in close proximity to wells to disinfect the frac water and to eliminate certain soluble organics such as BTEX, aromatics, and napthenic acids.BioLargo has been working on the problem of providing cost-effective water management for over 7 years, and now has a proven solution that is ready for commercialization.
On August 17th, a team of researchers at the University of Alberta unveiled the AOS Filter/Reactor to an audience of over 30 experts from oil & gas, water treatment, maritime, academia, government and finance. Findings from over 100 studies were presented and demonstrated the AOS Filter/Reactor’s ability to disinfect pathogens 100 times more effectively than chlorine, at 10 times the speed, and at only 1/20th of the cost of the closest competitor. One year earlier, the AOS Filter/Reactor received the coveted Technology Star Award from New Technology Magazine, known as the First Word on Oil Patch Innovation.
We are confident that the AOS Filter/Reactor is the answer to Water Management issues that the industry is searching for, but we also know that successfully taking a revolutionary and disruptive technology to market is a Herculean task that will require a formidable industry partner and begs for public research dollars to sponsor the engineering and design work to deliver a scalable solution. Discussions with potential partners after the recent unveiling are accelerating as our company continues to seek the best-fitting partner to quickly bring the AOS Filter/Reactor to market. Industry is well aware that the stakes are high.

BioLargo AOS Filter:
Unprecedented advanced oxidation:
Disinfects at less than 1/20th the energy cost of the nearest technical competitor, greater than 100 times the efficacy, and more than 10 times faster.
Especially effective removing soluble organics like napthenic acids, 1,4 dioxane, benzene, and aromatics.
The AOS Filter/Reactor combines iodine, water filter materials and electrolysis within a flow-through water filter device, generating extremely high oxidation potential that easily and quickly eliminates soluble organic contaminants and efficiently delivers extremely high rates of disinfection. The science behind the AOS Filter represents an astonishing discovery that will fundamentally change the way water is treated.
Remarkably, the BioLargo AOS Filter/Reactor uses commonly understood materials that are readily available, and it operates at ultra-low power levels. Its configuration essentially converts what would ordinarily be considered a typical filter into a safe and highly effective electrochemical reactor that generates extremely high levels of oxidation potential across the surfaces within the device.  As a result, it can do the job at a fraction of the time and cost of any other known technology.
AOS Filter/Reactor CAP-X and OP-X Savings
Our team at BioLargo has already assembled hundreds of AOS Filter/Reactors from readily available parts as the company prepares for its first customer led commercial pilots. The cost to build one complete AOS Filter/Reactor system and the operating costs are a fraction of today’s competing systems. We expect to save large industries billions of dollars per year.
In her thesis at Tallinn University, “Advanced Oxidation Processes for Water Purification and Soil”, Anna Goi calculated the energy costs to operate UV and ozone technologies at varying pH levels to promote advanced oxidation and found that they can run in a wide range of anywhere from $100 per acre foot to as high as several thousand dollars per acre/foot. Energy cost for the AOS Filter/Reactor in a high saline environment is less than 1/20th the lowest cost in Goi’s study and is also less than 1/20th the energy cost of the nearest competing technology.  While cost savings is an obvious economic driver, the inherent nature of dealing with difficult contaminants and enhancing safety for workers and the environment only add to the value proposition.
The AOS Filter/Reactor Is Very Close To Commercialization
The next step for BioLargo is to engineer the unit to fit our customers’ needs to provide cost-effective on-site recycling of flowback and produced water. We have a number of experts in this area now working directly with our company to identify the key challenges and begin the arduous process of refinement to tackle the very high volume and demanding challenges. The large cost savings the AOS Filter/Reactor can provide has the potential to help return profitability to the oil & gas industry and at the same time benefit global economic growth by providing greater quantities of cheaper energy.  Any energy producer dedicated to pursuing best practices for increased sustainability and profitability will find the AOS Filter/Reactor very compelling.
This article was brought to you by BioLargo. BioLargo, Inc. designs and delivers nature’s disinfectant iodine. Its technologies include AOS Filter, CupriDyne, and Isan system.
Tags: Innovation , Water  LInk to Article Here
Posted by BioLargo at 19:55