Top Allergy Myths: There is no such thing as an Iodine Allergy-

Myth: Iodine Allergy is a Myth - Example: People Who Are Allergic to Shellfish Are Not Actually Allergic to the Iodine in the Shellfish, rather research indicates its the muscle protein.

The relationship of radiocontrast, iodine, and seafood allergies: a medical myth exposed.

Shellfish-iodine nexus is a myth

I read with interest the Florida case with the $4.7 million verdict (Iodine contrast media kills man with known shellfish allergy, What’s the Verdict? J Fam Pract. 2010;59:244). As a dermatologist who deals with many allergy issues, I was surprised that the verdict was based on the “supposed” cross-reaction of a shellfish allergy with contrast iodine material. Unfortunately, this is a medical myth that has been propagated for many years.

An excellent review on this subject recently appeared in the Journal of Emergency Medicine.1 The authors surveyed 231 physicians at 6 academic medical centers and found that 89% of cardiologists and two-thirds of radiologists routinely ask their patients if they are allergic to shellfish before administering an iodinated contrast agent. They also noted that 35% of radiologists and 50% of cardiologists would withhold radiocontrast or premedicate patients with shellfish allergies.

When an individual has a seafood or shellfish allergy, it is the protein in the animal that the individual is allergic to. The allergens from fish and shellfish are actually 2 different types of proteins, and have absolutely nothing to do with iodine. Iodine is an essential element that is found throughout the body and is essential to the production of thyroid hormone and various amino acids in the body. One could not survive without iodine. It is, therefore, impossible to have a true allergy to iodine. Although an individual could react to the various allergens contained in iodine skin preps, it is not the iodine that is causing the allergy.

It is the general opinion of experts in the fields of radiology and allergy/immunology that any “allergic” individual has a 3-fold increase in the likelihood of an allergic reaction to radiocontrast material, and more than 55% of individuals have at least 1 or 2 allergies. It is not reasonable to withhold needed treatment, whether it be contrast dye, anesthesia, or any medication, for fear of a potential reaction—particularly in an emergency like the case in question, in which the procedure was done in an attempt to save the life of a 41-year-old patient. The risk of dying from cardiac arrest is great, while the risk of death from contrast dye is miniscule.

Propagating the myth of the seafood-iodine-contrast material connection not only disseminates misinformation, but also breeds multimillion dollar lawsuits.

Breaking down the facts in that Wyoming drinking water study.

The shale gas boom has been a rare bright spot in the U.S. economy, so much of the country let out a shudder two weeks ago when the Environmental Protection Agency issued a "draft" report that the drilling process of hydraulic fracturing may have contaminated ground water in Pavillion, Wyoming. The good news is that the study is neither definitive nor applicable to the rest of the country.

"When considered together with other lines of evidence, the data indicates likely impact to ground water that can be explained by hydraulic fracking," said the EPA report, referring to the drilling process that blasts water and chemicals into shale rock to release oil and natural gas. The news caused elation among environmentalists and many in the media who want to shut down fracking.

More than one-third of all natural gas drilling now uses fracking, and that percentage is rising. If the EPA Wyoming study holds up under scrutiny, an industry that employs tens of thousands could be in peril.

But does it stand up? This is the first major study to have detected linkage between fracking and ground-water pollution, and the EPA draft hasn't been peer reviewed by independent scientific analysts. Critics are already picking apart the study, which Wyoming Governor Matt Mead called "scientifically questionable." 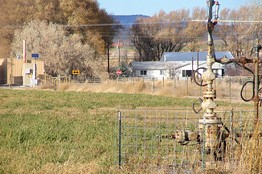 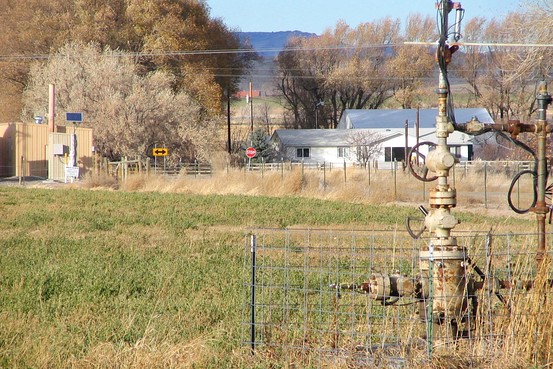 Natural gas wellheads and other production facilities are shown around the rural community of Pavillion, Wyoming in 2007.

The EPA says it launched the study in response to complaints "regarding objectionable taste and odor problems in well water." What it doesn't say is that the U.S. Geological Survey has detected organic chemicals in the well water in Pavillion (population 175) for at least 50 years—long before fracking was employed. There are other problems with the study that either the EPA failed to disclose or the press has given little attention to:

• The EPA study concedes that "detections in drinking water wells are generally below [i.e., in compliance with] established health and safety standards." The dangerous compound EPA says it found in the drinking wells was 2-butoxyethyl phosphate. The Petroleum Association of Wyoming says that 2-BE isn't an oil and gas chemical but is a common fire retardant used in association with plastics and plastic components used in drinking wells.

• The pollution detected by the EPA and alleged to be linked to fracking was found in deep-water "monitoring wells"—not the shallower drinking wells. It's far from certain that pollution in these deeper wells caused the pollution in drinking wells. The deep-water wells that EPA drilled are located near a natural gas reservoir. Encana Corp., which owns more than 100 wells around Pavillion, says it didn't "put the natural gas at the bottom of the EPA's deep monitoring wells. Nature did."

• To the extent that drilling chemicals have been detected in monitoring wells, the EPA admits this may result from "legacy pits," which are old wells that were drilled many years before fracking was employed. The EPA also concedes that the inferior design of Pavillion's old wells allows seepage into the water supply. Safer well construction of the kind normally practiced today might have prevented any contaminants from leaking into the water supply.

• The fracking in Pavillion takes place in unusually shallow wells of fewer than 1,000 to 1,500 feet deep. Most fracking today occurs 10,000 feet deep or more, far below drinking water wells, which are normally less than 500 feet. Even the EPA report acknowledges that Pavillion's drilling conditions are far different from other areas of the country, such as the Marcellus shale in Pennsylvania. This calls into question the relevance of the Wyoming finding to newer and more sophisticated fracking operations in more than 20 states.

The safety of America's drinking water needs to be protected, as the fracking industry itself well knows. Nothing would shut down drilling faster, and destroy billions of dollars of investment, than media interviews with mothers afraid to let their kids brush their teeth with polluted water. So the EPA study needs to be carefully reviewed.

But the EPA's credibility is also open to review. The agency is dominated by anticarbon true believers, and the Obama Administration has waged a campaign to raise the price and limit the production of fossil fuels.

Natural gas carries a smaller carbon footprint than coal or oil, and greens once endorsed it as an alternative to coal and nuclear power. But as the shale gas revolution has advanced, greens are worried that plentiful natural gas will price wind and solar even further out of the market. This could mean many more of the White House's subsidized investments will go belly up like Solyndra.

The other big issue is regulatory control. Hydraulic fracturing isn't regulated by the EPA, and in 2005 Congress reaffirmed that it did not want the EPA to do so under the Safe Drinking Water Act. The states regulate gas drilling, and by and large they have done the job well. Texas and Florida adopted rules last week that followed other states in requiring companies to disclose their fracking chemicals.

But the EPA wants to muscle in, and its Wyoming study will help in that campaign. The agency is already preparing to promulgate new rules regulating fracking next year. North Dakota Governor Jack Dalrymple says that new EPA rules restricting fracking "would have a huge economic impact on our state's energy development. We believe strongly this should be regulated by the states." Some 3,000 wells in the vast Bakken shale in North Dakota use fracking.

By all means take threats to drinking water seriously. But we also need to be sure that regulators aren't spreading needless fears so they can enhance their own power while pursuing an ideological agenda.

Printed in The Wall Street Journal, page 16
Posted by BioLargo at 21:04 No comments:

Posted by BioLargo at 08:25 No comments:

Iodine is an essential trace mineral required for proper thyroid function. iodine might also play a role in immune function. Iodine is present in some foods naturally and is added to some foods to ensure adequate intake for people who live in places where iodine levels in the environment are low. Levels of iodine vary considerably among foods.

Seaweed earns the gold standard among food sources for iodine content. A study published in the October 2004 issue of the journal "Thyroid" evaluated iodine levels in 12 species of commonly consumed seaweed and found wide variability. At the low end was nori, a popular seaweed that is used to make sushi in Japanese cooking, at 16 mcg per gram. The highest levels in the study were obtained from a commercial salt substitute made from processed kelp granules that contained 8,100 mcg per gram. Harvesting methods influenced iodine concentrations in samples of kelp from Namibia, which showed that sun-bleached kelp contained about 500 mcg per gram, while fresh samples contained more than 6,500 mcg per gram. The researcher also noted that iodine is water soluble and that cooking and storage in humid conditions decrease iodine content in foods.

Some meats and fish are good sources of iodine. Iodine content in fish varies, depending on the concentrations in the water they inhabit. Saltwater fish tend to have about six times as much iodine, on average, as freshwater fish, providing as much as 6 mcg per gram, while freshwater fish contain an average of 0.375 mcg per gram. Poultry contains 66 and beef contains 59. Processed meats, such as sausage and ham, contain 335, again due to their high salt content.

Eggs are an excellent source of iodine, with 1.6 mcg per gram. Milk and yogurt contain about 0.7 mcg per gram, and cheese contains about 0.47 mcg per gram, values that reflect a form of enrichment through iodine added to animal feed. A seasonal variation exists in iodine levels in milk, with lower levels in the summer months, when more animals have access to grass pastures and less supplemental feeding, and higher levels in the winter months when commercial feeds are used. Cheese is low in iodine because, being water-soluble, iodine leaves with the water that is drained off during production.

Read more: http://www.livestrong.com/article/410068-iodine-food-sources/#ixzz1hTrecmzU
Posted by BioLargo at 11:07 No comments: