Beginning this year and continuing over the next 5 years, the International MaritimeOrganization and the U.S. Coast Guard are requiring an estimated 65,000 ships over 400 gross tons to be fitted with approved Ballast Water Treatment Systems, “BWTS”.  Global Water Intelligence estimates that the average cost to install each system is more than $750,000 and the total cost to operators to outfit every vessel will be about $50 billion.  This does not include operating costs and maintenance.
Increasing concerns over the transfer of invasive marine species across the world’s oceans through the transport and disposal of ballast water by large vessels have prompted the requirement.  The new Ballast Water Treatment Systems are required to sterilize or disinfect the seawater to prevent the spread of foreign microorganisms and larger organisms that can damage local environments.

A few examples of environmental damage caused by the transfer of invasive marine species of bacteria, viruses, microorganisms and larger organisms are: 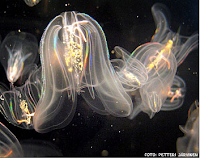 Mnemiopsis leidyi, a comb jelly (similar to a jellyfish) feeds on anything smaller than itself.  In its new environment, Mnemiopsis has no natural predators and has outcompeted native species for food. As a consequence, the once profitable anchovy fisheries in Russia and Turkey have almost disappeared.

zebra mussels are one of the most widely known invasions in the United States in the Great Lakes. These organisms grow on almost any structure, forming large clumps of mussels that can clog water intake pipes and damage or impair other structures.

Teredo navilis, a ship worm that is known as the termite of the sea, damages wooden docks, piers, and seawalls.  It was introduced to the United States during colonial times on wooden ships.

Current Solutions
The U.S. Coast Guard and the IMO have not yet approved any permanent Ballast Water Treatment Systems but are expected to begin approvals by the end of 2015.   Meanwhile, the U.S. Coast guard has approved 9 systems for temporary use as of April 2013: 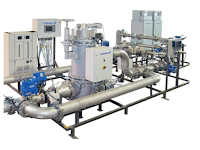 There are over 55 suppliers offering ballast water treatment systems and all are hoping to garner a piece of this giant 50 billion dollar opportunity.  A few of the systems are based on ozone and membrane technology but the lion’s share use UV followed by electro chlorination.  Video presentations for Balclor and Alfa Laval Tumba show that these systems are very complex and require a large footprint.   An example is the photo above of the Cathelco UV system.
University of Alberta researchers unveil new technology that can save the maritime industry billions of dollars per year 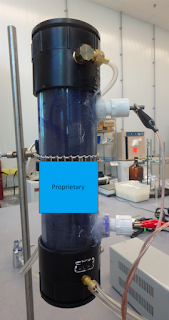 Maritime operators will be interested to learn about a new technology that was presented by researchers at the University of Alberta on August 17, 2015.  The “AOS Filter” created and developed by BioLargo, Inc. (BLGO) appears to be remarkably more effective than any other disinfection/decontamination technology and far less expensive than even the closest competitor.  The AOS Filter has the potential to save maritime operators billions of dollars in both capital and operating costs.

At the symposium, researchers presented an audience of industry, academia, government officials and investors with results of experiments and studies validating the company's technical claims that the AOS Filter is less than 1/20th the operating cost of the nearest technical competitor, greater than 100 times the efficacy (disinfection), and more than 10 times faster.

Researchers presented data from more than 100 studies replicating these findings, demonstrating the AOS Filter's important role and high value in maritime use and just about every segment of the global water industry estimated at $350 billion annually.

The Natural Iodine Cycle
Unlike electro chlorination that uses chlorine to disinfect, the AOS Filter uses a form of iodine that is naturally occurring in the ocean and is a nutrient and not a toxin.

Kenneth Code, BioLargo’s Chief Scientific Officer commented, “The all natural Iodine cycle is part of the natural ocean water cycles and it is well understood.  The ocean stores up iodine in the form of an iodate, and microscopic sea life and plants use it in their metabolism.  They release gases like methyl iodide and ethyl iodide that rise from the ocean into the high atmosphere, ionosphere, where the iodides are oxidized by UV light generating Iodine [I2]. These energized forms of iodine then come on shore in the rain, and fall onto the land and as they come into contact vegetation they react to form iodides and iodates.  The land drains to the river, the river to the ocean, and so it goes in a cycle. The Iodine Cycle is simply an elegant cleansing system for our earth and it is a critical cycle to maintain microbial balance in nature while, at the same time, iodine supports life as an essential nutrient.”
“Our AOS Filter replicates the mechanics of this natural cycle and enables us to safely release the AOS treated water back into the ocean.”

“The footprint of the AOS Filter is relatively small compared to UV and electro chlorination systems and the capital cost is highly competitive because it is very simple and is made from inexpensive parts that are readily available.  Additionally, the operating costs are only a fraction of all others.”
“Don’t let its small size fool you.  Flow rates for the AOS Filter are the same as proven carbon filtration and can handle any engineered flow rate. We also have a host of additional features that can be built into the system that enhance the AOS Filter’s selling proposition like; managing hydrogen sulfide gas as well as automation features that will further distinguish the AOS Filter from the competition.“

AOS Filter Capital Cost Savings
BioLargo has already assembled hundreds of AOS Filters from readily available parts as the company prepares for its first customer led commercial pilots.   Management reports that the cost to build one complete AOS Filter system is a fraction of today’s competing systems and that it expects is pricing model to be well received by industry.  With an average cost of competing systems estimated at $750,000, and a substantial cost savings (both Cap-X and Op-X), BioLargo’s AOS Filter could save the maritime industry billions of dollars.

AOS Filter Operating Cost Versus UV and Ozone
In her thesis at Tallinn University, “Advanced Oxidation Processes for Water Purification and Soil”,  Anna Goi calculated the energy costs to operate UV and ozone technologies at varying pH levels to promote advanced oxidation and found that they can run in a wide range of anywhere from $100 per acre foot to as high as several thousand dollars per acre/foot.  Energy cost for the AOS Filter in a high saline environment is less than 1/20th the energy cost of the nearest competing technology.
To put this in perspective; a tanker carrying 25 million gallons of ballast water is the equivalent of about 75 acre/feet that has to be processed on each voyage.  At $100 per acre/foot for energy costs alone, that equals close to $7,500 per trip.  On the other hand, the AOS Filter uses so little energy that the energy cost to process one acre/foot at less than 1/20th would be in the $375 range or less, per voyage, versus $7,500 for the cheapest system and most likely much higher.  If a vessel with this much ballast water makes 30 voyages per year, operating costs for energy to power the AOS Filter would be less than $11,250 versus a minimum of $225,000 for competing systems.  The energy savings alone leaves quite a bit of savings to help generate a rapid return on investment for the customer.  Management is quick to point out, that the other value propositions offered by the AOS Filter will enhance the payback even more quickly, but they want to keep those secret for today.

AOS Filter Versus Electro Chlorination
It is well known that only 20 PPM (part per million) Iodine are required to achieve the same disinfection as 300 PPM chlorine.  Chlorine may be very fast and ordinary iodine is considered slow, however, the AOS Filter is able to speed up the action of iodine making it as fast or faster than chlorine.  Iodine also has the advantage of being effective in a broad pH range as compared to the highly narrow range of efficacy for Chlorine, thereby enhancing reliability and ease of use.  The AOS Filter can consistently generate complete disinfection / sterilization and it is well suited to operate in high saline environments like seawater and other oil and gas industry related waters.

The AOS Filter Is Ready For Commercialization
With proven technology that is far advanced over all others; combined with low energy costs and competitive pricing, the AOS Filter is ready for commercialization.  BioLargo is positioned to be able to help maritime operators meet the stringent new requirements and at the same time, save them billions of dollars.  Management reports that discussions are underway with potential strategic alliance partners and customers.  The next step is engineering the unit to fit the customers’ needs.  A few examples of savings for operators are included below.

Navios Maritime Holdings Inc. (NM) operates as a seaborne shipping and logistics company. It focuses on the transportation and transshipment of dry bulk commodities, including iron ore, coal, and grains and the company fleet consists of 66 vessels totaling 6.6 million deadweight tons.
With 66 vessels, cost savings to Navios, if management elects to use the AOS Filter, could be substantial, especially at a time when Navios has been showing losses.

DryShips Inc. (DRYS) provides ocean transportation services for drybulk and petroleum cargoes, and offshore deepwater drilling services. The company operates through Drybulk, Tanker, and Drilling segments.  As of February 25, 2015, it owned a fleet of 39 drybulk carriers comprising 13 Capesize, 24 Panamax, and 2 Supramax carriers with a combined deadweight tonnage of approximately 4.3 million tons; 10 tankers, including 4 Suezmax and 6 Aframax tankers with a combined deadweight tonnage of approximately 1.3 million tons; and 13 offshore ultra deepwater drilling units comprising 2 ultra deepwater semisubmersible drilling rigs and 11 ultra deepwater drillships.
If DryShips were to employ the AOS Filter to meet the new regulations, the cost savings could be substantial enough to help return towards profitability.

Conclusion
Data from researchers conducting over 100 university studies show that the AOS Filter is the leading solution for the maritime industry as it offers superior efficacy and substantial savings.  The AOS Filter has been shown to be so high impact and so low cost that it is expected to soon be pulled into almost every segment of the 350 billion dollar water treatment industry.  The company is pursing a licensing and joint venture strategy to gear up for commercialization.

Contamination of the oceans combined with troublesome worldwide pollution and global drought are all pointing to big global demand and a very bright future for BioLargo’s breakthrough technology.  This company has all the makings for a very big commercial success.

For more about BioLargo:  www.BioLargo.com

** update to Article Summer 2017-  The US Coast Guard and the IMO extended the deadlines for enforcement of regulations that affected discharge limits by five years putting this emerging industry into a period of uncertainty.  BioLargo's management chose to hold until such time as it was more able to predict the future of this industry and was more fully capitalized to be able to respond to this opportunity.  Relevant Article

Posted by BioLargo at 13:37 No comments: