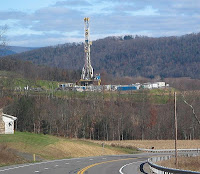 While the book is clearly intended to inform on the fierce shale gas debate, investors can also glean some wisdom from its pages. In his back cover accolade, former CIA Director James Woolsey cites “the revolutionary notion of producing fuels affordably from small, highly distributed facilities.” Distributed generation of electricity has some currency, especially with wind and solar power. But small-scale fuel production has always run up against that chemical engineering bogey: economies of scale. This book advocates innovation in small footprint production of useful liquids from a host of raw materials. Specific technology directions are cited to achieve these objectives.

Low natural gas prices have driven activity to gas with a high proportion of high value natural gas liquids. There is a glut of the component ethane. The dominant use for ethane is for production of ethylene. The dilemma is that huge production in the Marcellus and Utica is over 1,200 miles from crackers in Texas and Louisiana. A conventional local cracker would require long-term production agreements with multiple gas operators. A small footprint cracker could be proximal to the rigs and require production from just a single producer. Financing of such a facility would be fraction of that for a large cracker, and the build time commensurately shorter. This is one of the examples of new business areas that could be spawned by the shale gale.

Stranded gas (natural gas with no market outlet) on land is targeted by the author as a raw material of opportunity. He particularly cites ammonia fertilizer production as a target because natural gas price represents ninety percent of the cost of the product. As if on cue is the recent announcement of a fertilizer plant using gas associated with shale oil in the Bakken, which otherwise would be flared.

The environmental hurdles provide investment opportunities as well. But the author warns that the goal posts are moving. The re-use of water for fracturing is predicted as becoming de rigueur especially in the Marcellus. But because new technology is going to permit moderately salty water to be used, certain types of desalination are going to be useless. One requirement will not go away, however, and that is for removal of bacteria. The author mentions newer techniques of UV radiation and molecular iodine. For the latter, the reference cited, and mention of the efficacy as compared to chlorine, shows that he could be pointing to BioLargo. BioLargo has patent protected delivery mechanisms for a very active form of iodine for disinfection. And shale gas operations are a large target market for BioLargo.

BioLargo has developed a proprietary molecular iodine solution, called CupriDyne™ that is highly effective in killing bacteria and sopping up heavy metals and radioactive elements. The technology works by releasing controlled levels of the powerful oxidant Iodine in stable molecular form. The environmentally friendly element does the job at small doses and the reaction products can be easily harvested. The same technology can also be combined with other needed water treatment steps, such as filtration and desalination.

BioLargo has built a solid base of technical claims under the leadership of Chief Technology Officer Kenneth R. Code, who invented the BioLargo technology and was named to the NSERC research chair late last year. The company also added water expert Harry DeLonge, who has 40 years of experience with Pepsi Cola International (NYSE: PEP), Dr. Vikram Rao, who most recently served as a senior vice-president and Chief Technical Officer at Halliburton (NYSE: HAL), and Richard Bickerstaff, a 15+ year oil field chemist to help customize solution to the shale gas and oil industries.
Posted by BioLargo at 17:01 No comments: