The Alberta Oil Sands in Canada contain the third-largest known oil reserves in the world, and their recovery operations are among the most successful to date. Of Alberta's total oil reserves, 168.7 billion barrels, or about 99 percent, come from the oil sands; the oil sands also account for an overwhelming majority (about 98 percent) of Canada's total oil reserves. The Canadian Association of Petroleum Producers, CAPP, projects in its annual forecast that Canada's oil production will more than double in the next 15 years, rising from 3.2 million barrels per day in 2013 to 6.7 million barrels per day by 2030. This projection is entirely driven by oil sands production. 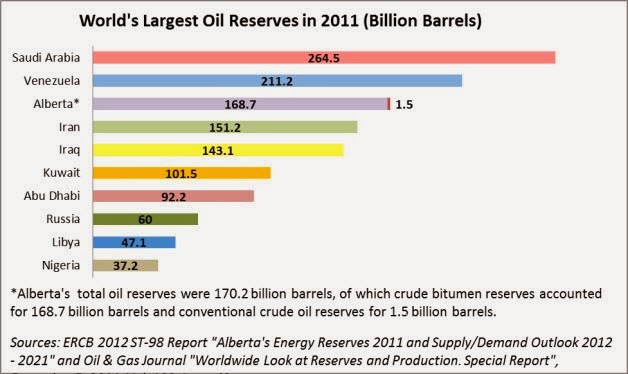 Oil sands can be found throughout the world, but, of the nations with major reserves, Canada has the best political stability and is friendliest to energy producers. Consequently, global heavyweights such as ExxonMobil (XOM), Royal Dutch Shell (RDS.A), and Chevron (CVX) have major interests in Alberta. A myriad of other producers, such as ConocoPhillips (COP), BP, Devon (DVN), Marathon Oil (MRO), PetroChina (PTR), Statoil (STO), Suncor (SU), and Canadian Natural Resources (CNQ) also have a presence in Alberta and offer investors intriguing investment opportunities. Major oil field services companies, such as Halliburton (HAL) and Schlumberger (SLB) play a major role in the region as well, with many projects simultaneously coming on line.


At a macro level, it is noteworthy that the Alberta oil sands are ramping up at a time when many of the major oil producers are experiencing declining production and when the world needs more oil production simply to keep up with demand. In fact, ExxonMobil, Royal Dutch Shell, and Chevron all reported disappointing results for the fourth quarter and full fiscal year 2013. Production is declining, even as they have been spending at record levels to boost oil and gas output.

Research analyst, tech, biotech, growth
Disclosure: I have no positions in any stocks mentioned, and no plans to initiate


any positions within the next 72 hours. I wrote this article myself, and it expresses
my own opinions. I am not receiving compensation for it.
I have no business relationship with any company whose stock
is mentioned in this article.

Link to Text of Article at Seeking Alpha
Posted by BioLargo at 16:55 No comments: