Water.org helps expose the global water crisis and its worth your time, energy and money! Take a moment to learn ... - Link Here

Posted by BioLargo at 21:23 No comments:

NEW YORK—A study that showed copper kills bacteria on contact points to an expansion of possible uses for the industrial metal, which is already found in a range of products.

The prospect of hospitals around the world installing copper surfaces, amid other applications of the metal, have copper producers predicting an increase in demand.

However, efforts to use more copper in medical environments are still largely in the research stage, and it's unclear whether a significant increase in consumption of the metal will result. 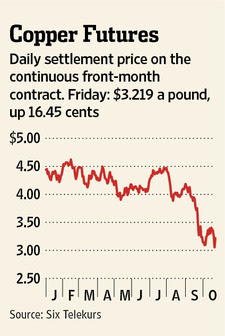 "Certainly, it's one of several potential sources of demand growth for copper over the next few years," said Nicholas Snowdon, a base-metals analyst with Barclays Capital. "It's something that's been on the radar for some time, but it's still not known what degree of uptake there's going to be."

Concerns about demand for copper have driven futures prices for much of this year. Strong demand from China, the world's No. 1 consumer of the metal, helped futures traded in New York settle above $4.60 a pound in February, an all-time high, while concern that the euro zone's debt crisis would cause a global economic slowdown sent prices to just above $3 Thursday. On Friday, copper for October delivery settled at $3.2190, up 5.4%.

The study, funded by the U.S. Department of Defense, found copper surfaces in rooms in intensive-care units cut the amount of bacteria in the rooms by 97% and reduced the rate of hospital-acquired infections by 41%. The copper was tested on a variety of bacteria, including a strain of E. coli and MRSA, a type of staph bacteria that can be difficult to treat.

"If this research translates…we could potentially cut the cost of hospital-acquired infections," said Dr. Michael Schmidt, vice chairman of microbiology and immunology at the Medical University of South Carolina, who led the study.

Approximately one out of every 20 hospitalized patients will contract an infection related to their health care while in the hospital, according to the Centers for Disease Control and Prevention.

Mr. Schmidt said copper's superior ability to conduct electricity is what helps the metal prevent the spread of germs. All living things generate electricity, and when bacteria come in contact with a copper surface, the metal siphons off their electrons, leaving them without energy, he said.

The metal does this naturally, requiring no human intervention, he said.

The company also signed a collaboration agreement with Chile's rapidly expanding subway network to ensure future stations will be outfitted with copper handrails instead of stainless steel or plastic.

"If you add in the public-transport sector, that number could be one million metric tons" a year of increased demand, Mr. Liebbrandt said.

Analysts are more cautious about the impact of antimicrobial applications on the global copper market.

Write to Tatyana Shumsky at tatyana.shumsky@dowjones.com

Contaminated equipment and pools of tainted water on the floor likely led to the spread of deadly listeria bacteria at a Colorado cantaloupe farm, federal officials said Wednesday.

It is the first time the Food and Drug Administration has described what likely led to the outbreak, which is the deadliest food-borne illness incident since 1985. The death toll rose to 25 people Wednesday, according to the Centers for Disease Control and Prevention.

"The packing facility's design allowed water to pool on the floor near equipment and employee walkways," the FDA said in a report. The facility was "constructed in a manner that made it difficult to clean," the agency said.

In a letter to the cantaloupe facility, Jensen Farms of Holly, Colo., the FDA said 13 of 39 tests for listeria on facility equipment surfaces were positive for the bacteria. "These positive swabs were taken from different locations throughout the washing and packing areas in your facility, all of which were either food contact surfaces or areas adjacent to food contact surfaces," the FDA said in the letter.

The farm, in a statement issued Wednesday, said it needed time to review the FDA findings. It pledged not to resume cantaloupe production until it was "completely satisfied that we have done everything in our power to ensure the safety of our products."

Jensen Farms announced a multistate recall of millions of cantaloupes Sept. 14, a day before the FDA confirmed the farm was the source of the outbreak. There were 300,000 cases of recalled cantaloupes, containing 1.5 million to 4.5 million melons, shipped to retailers and wholesalers in 20 states.

It is still unclear how listeria got into the cantaloupe packing plant before it spread among the melons, the FDA said. It could have come from the field the melons were grown in, or a contaminated truck used to haul them.

A dump truck used to transport defective melons to a cattle ranch was parked near the open-air packing facility, said Jim Gorny, FDA senior adviser for public safety. Cattle can be a carrier of listeria, and the truck used to transport the discarded melons could have brought the bacteria back to the farm after contact with the cattle, Mr. Gorny said.

The city water source used by Jensen Farms wasn't contaminated, the FDA said. But FDA investigators are still looking into the possibility that washing and drying equipment—previously used by potato farmers—became contaminated and spread the bacteria. Mr. Gorny said there was no concern about the safety of potatoes because, in general, they aren't eaten raw.

The safety conditions at the Jensen Farms packing facility come under the oversight authority of the FDA, but the agency hadn't inspected the facility before the listeria outbreak, according to Roberta Wagner, FDA deputy director for regulatory affairs.

Under a new food-safety law signed by President Barack Obama this year, inspections of the facility will be required, but only once every five to seven years, Ms. Wagner said.

Write to Bill Tomson at bill.tomson@dowjones.com

Posted by BioLargo at 10:20 No comments:

Labels: Iodine from BioLargo is key to food safety

By ANA CAMPOY And RUSSELL GOLD

ARLINGTON, Texas—Residents living amid oil and gas well sites urged federal environmental regulators Thursday to implement rules that would require the industry to capture almost all of the smog-producing compounds it now releases while drilling.

The resurgence of domestic onshore oil and gas drilling has created thousands of jobs and produced billions in profits for shareholders. It has even prompted talk of slashing U.S. dependence on foreign energy sources. Drilling into shale rock and using hydraulic fracturing to break open the rock and release oil and gas has spread from Texas to Pennsylvania, Louisiana, North Dakota and Ohio.

Residents and industry representatives attended a public hearing here Thursday, the last of three across the U.S. to gather comment on the proposed rules from the Environmental Protection Agency, which could go into effect next spring.

The EPA's proposed new emission regulations would govern all oil and gas drilling, though its concern is focused on new wells into shale because drilling and hydraulically fracturing these wells requires drilling rigs, compressor stations and other machinery that generate air pollution.

In north Texas, above the fecund Barnett Shale, where the drilling renaissance began a decade ago, some residents were concerned their air was being fouled from such operations.

"This is a metropolitan area and we need to breathe," said Susan Waskey, a 53-year-old retiree from Argyle, Texas who was among about 140 people who attended the hearing.

Many of the residents who spoke in the morning portion of the hearing favored the EPA proposals, but at least one said she was concerned that the economic benefits of drilling would be hindered by more rules.

The industry, wary of public discontent, isn't outright opposing the proposed new rules, but wants to modify parts and delay their implementation.

"There needs to be more time for compliance," said Thomas Sullivan, an environmental engineering consultant who spoke on behalf of the Texas Oil and Gas Association, a trade group.

The industry's position, however, didn't appease many of the citizens at the gathering.

"It's just a stall tactic," said John Rath, a 54-year-old resident of nearby Grapevine, Texas, who attended the hearing. "Our air needs to get cleaned up."

The new rules also target methane, the primary ingredient in natural gas and, says the EPA, especially potent at trapping heat in the atmosphere.

The agency is developing the regulations as part of a court agreement that resulted from a 2009 lawsuit by two environmental groups that accused it of failing to properly oversee air pollution from the oil and natural gas industry. Under the deal, the EPA must issue the final rules by the end of February.

Several studies have found that emissions from the large number of machines required to develop modern gas fields is having a negative impact on air quality.

In 2009, a Wyoming Department of Environmental Quality study found that large-scale natural gas development in a rural county, with a population density of two people per square mile, had pushed ozone levels beyond federal air standards.

The environmental community is applauding the government's efforts. "This is the really the first time that the EPA is updating its old air standards to include the oil and gas industry," says Deb Nardone, the Sierra Club's Natural Gas Campaign Director.

The American Petroleum Institute, which lobbies for larger oil companies in Washington D.C., called the proposed changes reasonable. "Some rules are worse than others and this rule is not the end of the world as long as we can get time to implement it," says Howard Feldman, the group's director of regulatory and scientific affairs.

But some at the hearing raised questions about the data the EPA was using to determine the amount of gas that escapes into the air at well sites, saying that in many wells the amount was much smaller than what the agency estimated. Darren Smith, environment, health and safety manager at Devon Energy Corp., told EPA officials they should review their numbers before settling on any rules.

"We are strongly opposed to using misleading emission estimates to force this requirement where it isn't feasible," he told EPA officials during the hearing.

A spokeswoman from the EPA said the agency would evaluate all of the comments collected during the hearings before making any decisions.

Write to Ana Campoy at ana.campoy@dowjones.com and Russell Gold at russell.gold@wsj.com

Posted by BioLargo at 06:06 No comments: